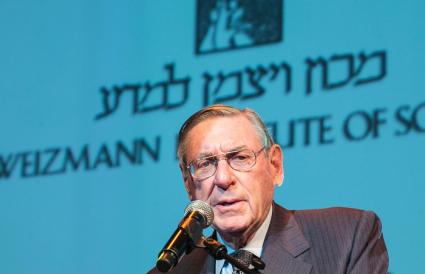 Lester Crown presides over the worldwide business interests and charitable giving of a dynasty established by his father Henry Crown and his uncles Irving and Sol, who together founded a Chicago building supply company in 1919. Prospering in the post-war boom of the 1950s, the Crown family business merged with General Dynamics in 1959 and became a global venture.

Born in 1925, Lester began working at the age of 12, as an office boy in the family business. He earned a BSc in chemical engineering from Northwestern University in 1945 and an MBA from Harvard University in 1949. Lester served as Vice Chair of the International Board of the Weizmann Institute for many years, and was awarded a PhD honoris causa from the Institute in 1990.

The Crown family’s major gifts to the Institute began in 1984, with the Crown Immunology Fund. They later established the Crown Human Genome Center (1998) and the Crown Photonics Center (2008). In 2012, the Crown Institute for Genomics became a founding pillar of the Nancy and Stephen Grand Israel National Center for Personalized Medicine. The family has recently committed to creating the Crown Materials Observatory as part of the Weizmann Institute's Center for Advanced and Intelligent Materials initiative. All seven of Lester and Renée Crown’s children have inherited the family's belief in philanthropy and hard work, and are continuing the legacy of leadership established by their parents and grandparents.