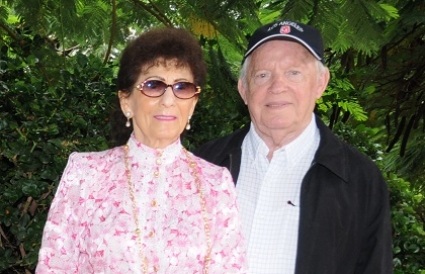 David Shapell (1921-2015) was a passionate supporter of Israel and the Jewish people, and was devoted to Holocaust remembrance and education. He was born in Wolbrom, Poland in 1921 to a deeply religious family. Most of his family perished in the Holocaust, except for his brother and sister. David escaped Poland and, until the end of the war, fought in the Polish army, which was under Russian control.

He met and married his wife, Fela, also a Holocaust survivor, after the war. They moved to the US in 1950, eventually settling in Los Angeles. In 1955, David, his brother-in-law, and his brother, Nathan, established Shapell Industries, a successful construction and real estate development company.

David and Fela Shapell with their grandchildren, Weizmann Institute of Science, 2015