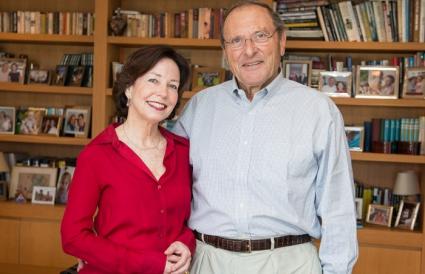 Pascal Mantoux earned degrees in mechanical engineering and business administration in Paris and later completed an executive degree from the Harvard Business School. He has held senior management positions in North and Latin America, Africa and the Middle East, as well as Continental and Eastern Europe serving global industrial corporations such as Westinghouse Air Brake, Tenneco, J.I. Case, and Poclain.

Ilana Mantoux studied sociology and political science at the Hebrew University of Jerusalem, and worked in human resources in the cardiology department of the Sourasky Medical Center in Tel Aviv for many years. Together, Pascal and Ilana have five children, and divide their time between Israel and Pascal’s native France.

They have given generously to the Weizmann Institute beginning in 2008 by underwriting the startup equipment of Dr. Jacob Hanna, a stem cell researcher in the Department of Molecular Genetics. They funded a collaboration between the Institute and the Chaim Sheba Medical Center, and named Prof. Benjamin Geiger’s lab in the Department of Molecular Cell Biology in memory of Pascal’s father. In 2013, they established the Ilana and Pascal Mantoux Institute for Bioinformatics, one of the four pillars of the Nancy and Stephen Grand Israel National Center for Personalized Medicine.